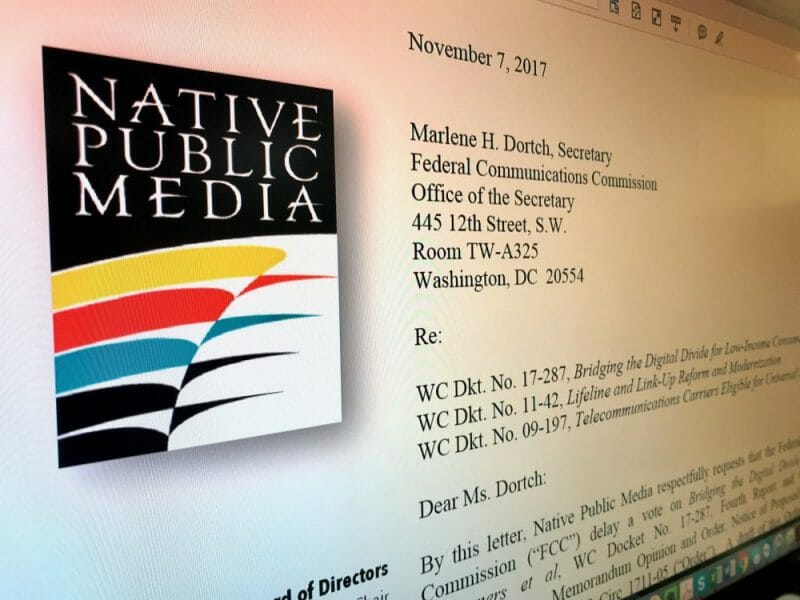 November 7, 2017 — Native Public Media responds to recent proposed Lifeline Program changes that will greatly impact areas that currently receive Enhanced Lifeline Tribal Support in a letter to the FCC.  A draft of the orders explaining the proposed changes to the Lifeline Program was released on October 26th, 2017 and the proposed rulings appear on the tentative agenda for the FCC’s November 16th, 2017 Open Meeting.

Loris Taylor, President and CEO of the Native Public Media, Inc., urges the FCC to delay the Lifeline Program changes, stating the changes adversely effect many of the Tribal members who have access to Lifeline service because of the Enhanced Lifeline Tribal Support (“ELTS”) program, which the rulings would seek to revise.

In the letter, Taylor asserts that “the [Federal Communications] Commission has failed to provide notice and an opportunity to comment on these foregoing major changes or to support the changes with empirical justifications.

“The ETLS subsidy was adopted by the Commission in 2000 to remedy telecommunications and economic disparities throughout Indian Country. That disparity continues. The FCC’s 2016 Broadband Progress Support shows that Tribal lands still sorely lack access to advanced telecommunications services. The Order [WC Dkt. No. 17-287, et. al] will increase this disparity and severely undermine the overarching purpose of the ETLS program, which is to provide low-income consumers with vital communication services.”

Read the Full Response to FCC by Native Public Media

Native Public Media is a Hopi and Navajo Tribe-based organization that works to secure a voice for Native America among policy-making bodies and among the media democracy movement, promoting greater access and larger audiences for Native American voices.

Read more on the FCC’s proposed changes to the Lifeline Program here.